It’s time for the second leg of the Texas Two Step — The Shell Houston Open. One week until the Masters and players are hoping to play well to gain confidence for the tournament that actually matters. Good course and pretty strong field (15 out of the top 30 in the world) means it’ll be a good one to watch. Also congrats to the tournament for having one of the better hashtags for the event. Get ready for a preview full of grainy images! It’s #SHOtime!

Royal Dutch Shell sponsors the second leg of the Texas Oil Swing. Betcha didn’t know that Shell’s full name was actually Royal Dutch Shell. Well I didn’t either! So I’m going to spend this section trying to figure out what in the world the Netherlands, petroleum and sea animal houses have to do with each other. Off to Wikipedia!

Ok I’m back. First thing I learned is that the Royal Dutch Shell group was created in 1907 as a way for two smaller companies to combine resources in order to compete with Standard Oil who was the giant in global oil. Unfortunately for Standard Oil, the US Supreme Court ruled that it was a monopoly and dissolved it in 1911. Unlike Standard Oil, both the Royal Dutch Petroleum Company (Netherlands duh) and “Shell” Transport and Trading Company Ltd (United Kingdom, and yes, those quotation marks were part of the company’s legal name) didn’t have to deal with US monopoly laws. And their partnership thrived.

END_OF_DOCUMENT_TOKEN_TO_BE_REPLACED

Texas once again before the Masters! For those who haven’t read our picks before, we don’t lose. Just an fyi.

With only 4 players of mine making the cut at the Valero (tough after having 4 of them in the super windy Thursday morning wave), I was expecting to not cash this week. But after Jimmy Walker put on a clinic and destroyed the field, and my other three players all under par on Sunday, I coasted to wins in all 4 of my contests. I’m 6/6 with the picks I post for free here, looking to go 7/7! Quick note, the first 4 guys here were pretty much obvious picks (I start with lower salaries first usually). The last two really took some thinking, and a little wavering. I feel like there could be a bunch of combinations of final two guys that would work, but these are (obviously) my two best guesses now.

Jason Kokrak ($8,800) — T7, T6, and T11 in the past three weeks. He’s playing well, very likely that he’s going to make the cut, so perfect play. And oh yeah, pretty sure I mentioned that he was going to play well last year (check out the bottom of that article). Granted, looks like he played badly at the Golf Club of Houston and missed the cut. Good thing I don’t put too much stock in past results.

END_OF_DOCUMENT_TOKEN_TO_BE_REPLACED

The biggest debate that will be talked about in the next few days before all eyes shift to Augusta will be whether Matt Jones won the SHO, or Matt Kutcher lost it. Even though Kutcher lost his 4 shot lead, and choked on his second shot on 18 by dumping it in the water, you can’t tell me that Jones didn’t go out there and win it. Jones birdied the last hole of regulation, and then chipped in on the first playoff hole. Add on to that Jones’s final round of 66 (the second best round of the day) and Jones definitely deserved the win from his fantastic play, and not Kutcher’s poor finish.

Rory McIlroy’s final round 65 was the lowest of the day by one over Jones and two others. Good momentum going into the Masters, but I’m not convinced it means much.

Tape delay sucks. But with hindsight being 20-20, we get to see the tournament in a whole new light. For example, when Matt Jones was about to hit his second shot into 18, Johnny Miller noted that if he birdied, there was a 30-40% chance for a playoff. Just after, they cut to Kutcher missing a birdie putt on 17 by an inch. Funny little moments that we would never have had without tape delay. Nevertheless, tape delay sucks.

Shaun Stefani and Retief Goosen both played well enough this week to extend their PGA Tour cards they had from medical issues. Talk about clutch playing when your job is on the line.

Remember in the preview when I mentioned that this might not be Stricker’s week because he’s just coming back now after a layoff? Well consider those words eaten. Sitting at -7, good for T7 after two rounds, Stricker is proving once again that all the practice he needs is watching basketball. Never again will I doubt the ability of an older player to play well after time off. Younger players, like Dustin Johnson? Yeah they need time to get back into form..

At first when I saw Sergio in the lead, I was pleasantly surprised. Here’s a guy who has bean through the wringer in terms of publicity, personal life and was left with, apparently, no confidence in himself. I was all ready to say something about how this weekend could really be important to get himself back on track on the PGA Tour. Well it turns out he’s already back in form. Of the 5 tournaments he’s played on the wrap-around PGA Tour this season, the worst he’s finished is T16. Looking back, he hasn’t missed a cut on tour since the 2012 PGA Championship! That being said, he still hasn’t won since 2012 either. So now the storyline becomes, does Sergio have what it takes to win?

Steven Bowditch had a solid missed cut today after a birdieless 78. I’m guessing his response was, “See you bastards in Augusta!” I’m only guessing his response because I haven’t seen an interview, nor does he have a twitter account. What he does have is an “unofficial” twitter account with 10 tweets. 9 of them coming in the past week and one from December 2012. Solid effort on their part.

The group of Keegan Bradley, Webb Simpson, and Phil Mickelson combined for 0 bogeys on the day. Their bestball scorecard of -12 is especially efficient with only 14 birdies total. Quite a difference from the bestball card of the week last week.

Speaking of Phil, glad to see that his love handles are feeling better. Also interesting to note that he spent Tuesday and Wednesday over at Augusta preparing for the Masters. Not sure when that information came out, but that’s a damn good timing for skipping the pro am. But hey, by the time you’re Phil’s age (I’m assuming) you know exactly what you have to do to play well, so I’m all for him doing what it takes to play well when it counts even if it’s at the expense of the Shell executives.

How about the “return” of J.B. Holmes (if you can call T1 after 1 round a return). After breaking his ankle while rollerblading a little over a year ago in March, 2013 he’s been playing well lately with his first top 10 in over a year at the API. In fact, if you’re wondering why you haven’t really heard from him in a while, that might be because he also had something called Chiari malformations back in 2011. Hopefully this is a sign of good things to come and hopefully he isn’t distracted by his Kentucky Wildcats in the final four on Saturday.

Dustin Johnson looked like he was thinking of his fiancée, Paulina Gretzky, a little too much during the round. Coming home to her might take some of the pain out of shooting and 80. Super glad I picked him in fantasy this week /s. 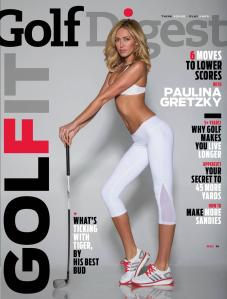 Kudos to Golf Digest for knowing their audience.

END_OF_DOCUMENT_TOKEN_TO_BE_REPLACED

It’s #SHOtime! Featuring a website looks like it’s straight out of the early 2000s, this week’s Shell Houston Open marks the second and final leg of the two week Texas Oil Swing. On the line this week for the winner, 500 FedEx Cup points, $1,152,000 out of a $6,400,000 purse, $25 Shell gas gift card good at participating Shell locations, and a trip to Augusta next week! While only three of those statements are true, you shouldn’t let that deter you from watching what hopefully is a great tournament that is a week before the best tournament.

The Shell Houston Open is held at the Golf Club of Houston’s Tournament course, different in name only from Redstone Golf Club where the tournament has been played for the past 10 years. Apparently some investment group bought up the Redstone courses and decided to change their names just to confuse everyone. Well they confused me so congrats to them.

One of the main issues for tournaments preceding majors is attracting a decent field. Many players like to rest up, and spend some time practicing shots they’re going to have to play during the next week. For example, low runners before the British Open, or gouging out of deep rough if it’s the US Open. Because of that, it can mean the top players skip the tournament before.

While the SHO doesn’t have to charter a plane to Europe like the John Deere Classic (which is played before the British Open), tournament organizers still need to do a little extra to make sure the top players are in Houston.