This is the seventh entry in the GOTM Practice Series. The goal of all the entries in this series is to not only to describe practice drills, but also make sure you know how to practice with the right mental attitude, something just as important as the physical act.

It’s been a while since the last post in the practice series so figured I should add more in the coming week! People always talk about how you need to have the correct mentality when practicing, and this drill is a great way to force that mindset.

Use two balls on each putt, and after hitting both from the same location, choose the hardest putt you left yourself with, and then hit both next putts from that location until you make both putts. Basically, imagine it’s a worst ball scramble on a putting green.

Play a 9 hole “course” where you pick an new type of putt for each “hole”, and keep score with how many over par you are. After, play 9 holes again and focus on beating your score from the first 9 holes.

The big key here, besides focusing on each putt (which is something I’ll talk about in a different practice post), is to watch your first putt, adjust the break that you read for your second putt. Helps you figure out a read correctly, and also makes you focus on the second putt because there’s no excuse for that putt to be further than the hole than your first. And as I mentioned above, this really helps make you focus on putting as if you were competing on a course.

This is the sixth entry in the GOTM Practice Series. The goal of all the entries in this series is to not only to describe practice drills, but also make sure you know how to practice with the right mental attitude, something just as important as the physical act.

Out in Arizona now and while hitting balls, I came across the classic problem with hitting golf balls on a range — it’s boring, and tough to keep focus. Everyone knows you’re not “supposed” to just whack balls without focus on the range, but that’s just not easy if you don’t have something to concentrate on. 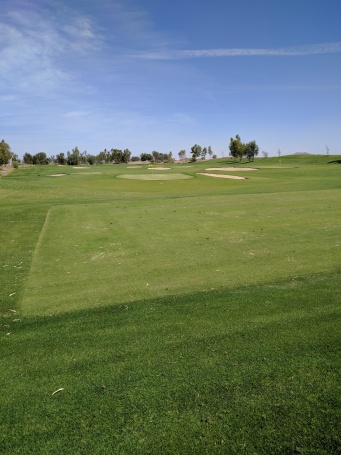 Don’t ask my why I took this pic vertically.

The exact “how” depends on the range you’re hitting at, but the idea is that usually there are usually greens or green like areas on a range. But for each green that you can judge the final position of a shot, you hit 5 balls and get a point for each ball that ends up on the green. A good way to play this game on the range is to play at the start of your range session, and then again at the end and see your improvement.

END_OF_DOCUMENT_TOKEN_TO_BE_REPLACED

This is the fifth entry in the GOTM Practice Series. The goal of all the entries in this series is to not only to describe practice drills, but also make sure you know how to practice with the right mental attitude, something just as important as the physical act.

Find a putting mat, we recommend this one from Amazon (though any will work), and putt until you make 15 in a row from any distance. Feel free to challenge yourself on distance and number you need to make. You aren’t going to get better making it easy on yourself.

You might be sitting here thinking, “why are the good people at GOTM wasting my time telling me to hit putts on a mat to practice?”. Well there’s a key difference I want to point out here instead of just whacking putts.

There are three types of goals when starting a drill, putting or otherwise.

First is time based, meaning “I’m going to practice putting on this mat for 15 minutes”.

Second is quantity based, meaning “I’m going to practice putting on this mat until I make 50 putts”.

Third is streak based, meaning “I’m going to practice putting on this mat until I make 15 putts in a row”.

I’ll argue that the first two of those goals are pointless because they don’t make you focus on every putt. It’s obvious for time based goals, and for quantity based goals, you can pretty much just count on slopping in enough putts given enough time. In order to complete a streak based drill, you need to make sure you’re thinking about making the putts.

For GOTM Practice Series posts in the future, expect to see a lot more of streak based goals.

As with all streaks, variations on this drill are the number in a row you have to make. Along with the number of times you practice.

This is the third entry in the GOTM Practice Series. The goal of all the entries in this series is to not only to describe practice drills, but also make sure you know how to practice with the right mental attitude, something just as important as the physical act.

Unlike the previous two drills, this one takes a partner to complete. Which might be a little limiting, but worth it if you can find someone to practice with since this is without a doubt the best putting drill I’ve ever seen. Besides a competitor, you’re going to need two holes on a practice green that are under 15 feet apart, ideally probably 10 feet — we’re looking for makable putts.

What to Focus on

Making putts. Literally every putt you need to be concentrating on making it, since the other person is doing the same thing. Think about it, if you aren’t concentrating for 5 putts in a row, you could easily lose right then. If you get someone who’s also just as involved in this drill, like I did back when I was in college at Michigan, you’ll be able to see what I’m talking about in terms of intensity. Every single putt becomes important.

I still think back to this game when I’m on the course standing over a 10 footer. I pretend that I’m trying to beat a teammate and if I don’t make the putt, I lose. Makes it much more important than just another stroke on the course. And when you’re trying to play your best, these length of putts make all the difference.

There aren’t really any variations on this drill. You’re going to want to keep the length of the putts below 15 feet if possible. Remember, the key is that each person should be making every putt, so once it gets over something like 15 feet, luck starts to become more a part of it. That’s not what we want to see. We’re looking for putts that you should make, and you should expect to make all putts under 15 feet.

This is the second entry in the GOTM Practice Series. The goal of all the entries in this series is to not only to describe practice drills, but also make sure you know how to practice with the right mental attitude, something just as important as the physical act.

This is probably going to be the easiest drill to explain. By chipping 4 balls in the same group, and not hitting the same chip twice in a row, you need to make 5 chips before you leave.

Now as for which 5 shots to make, that’s up to you. Considering how some chipping greens are built (with giant slopes, etc.), making 5 long chip shots isn’t the easiest. The way I approach it is by moving all around the greens hitting different at the beginning. If I find the specific green difficult, or I haven’t made any in a while, I’ll move to the simple, uphill shots from the fringe. There’s no harm in counting those little shots as makes, since you’re concentrating on making the shot just the same, but try not to start your chipping session with those.

END_OF_DOCUMENT_TOKEN_TO_BE_REPLACED

This is the first entry in the GOTM Practice Series. The goal of all the entries in this series is to not only to describe practice drills, but also make sure you know how to practice with the right mental attitude, something just as important as the physical act.

On the practice green, find three holes that form a triangle, all about the same distance from each other. Ideally they’re approximately 20 ft. to 30 ft. apart (8-12 steps), but any distance will do.

What to focus on

As with most of the drills in this series, the key is to focus on each putt as if it were an actual putt on the course. Any casual golfer knows that they focus differently on a putt if it’s for par as opposed to a double bogey. But the only way you’re going to be prepared for those par putts is if you concentrate when you practice. You know, the whole “practice like you play” idea.