Everyone’s watched this video of Tiger hitting the now named duck slice from a fairway bunker at the end of the 3rd round of the WGC Mexico.

I'd love to ask Tiger if he's practiced that exact type of shot before, a giant slice short iron from the fairway bunker, or if he's played enough golf where he can figure out how to play a shot real time. If it's answer one, we can see how specific practice is important. https://t.co/JcxP627coy

Tiger went ahead and made some comments about his decision making in a video, where he said knew that his initial 8 iron was too much club which made him switch to a 9 iron, but didn’t say if he knew that specifically because he’d hit exact shots like that before.

In the realm of specific shot practice, here’s a story about a time when that absolutely helped me.

At Pinehurst for the US Four Ball, we were on one of the practice greens (which we were told used to be the 18th at the #4 that they changed into a practice green during the redesign because the green was too difficult so players finishing #4 had trouble keeping it on the green which goes to show that public play courses can be too difficult). They had the giant bunkers and one of the shots we decided to practice were long bunker shots where the ball was on a big upslope near the front of the bunker.

The shot ended up being one where you open the club face to the point where you’re able to swing as hard as you can, have the ball go way into the air and comes down next to the hole with not much spin or roll. The thing to practice was knowing how open to have the club face and get a sense of the density of the sand. We hit probably 10-15 of those shots from different places, all on the upslopes to back pins, and felt pretty good about them. 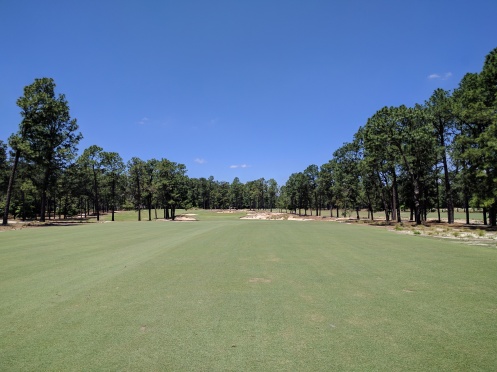 A look at the approach to the 16th hole.

Fast forward to couple days later where on the 16th hole at #2, after a bad drive where I had to hit my second shot to advance it to the green, I ended up on an upslope of a giant bunker short right of the green when the pin was back left. When my friend and I were walking up I could see right away it was the kind of shot I’d been practicing, and straight up told him “watch this” before I hit the shot, which ended up being a giant arched shot that landed a foot from the hole and stayed a foot from the hole. Perfect example of the benefit of practicing a specific shot.

Also, Tiger is a Jedi Master.