We’re back! No more tumor in my brain, and starting to feel better from the surgery, so time for more weekly previews. Though the fourth tournament of the year, this southern California event is by far the best full field tournament thus far and is on our first NFL-less weekend since September 2016 (we don’t count preseason or Pro-Bowl). A tournament with a lot to watch for coinciding with our first football-free weekend makes for an extra fun preview. But first, music:

Yes, Tiger Woods is playing. And if you didn’t know that before reading this, then you really need to follow golf more because everyone’s been talking about him playing this week. This is his first tournament in 17 months! So get excited.

It’s really going to be interesting watching him and seeing how he plays. Back a few weeks ago when he played in the Hero World Challenge, Tiger had the most number of birdies, but still finished T15 (30 players total).

Basically he’s like Brett Favre. Brett really was a great quarterback when he played in the NFL, tons of touchdowns, tons of great passes, but anytime he had the lead going into the 4th quarter, all us Packer fans would sit there worried that he was going to mess up, throw an interception, and we’d lose the game because of it. Oh Brett.

Same with Tiger it seems now. He hits a bunch of good shots, makes putts, and had the most number of birdies in the field. But I was so nervous watching every tee shot he was about to hit in that last tournament because it seems like his bad shots are so far away from the fairway and end with the possibility of him trying to avoid doubles and triples. Oh Tiger.
Anyway, I can’t wait to watch Tiger and root for him. He’s won 8 different tournaments at Torrey Pines (7 Farmers Insurance Opens and 1 US Open) so he knows the damn course as well as he can. And for real, it’s going to be great to see him compete again.

Oh yeah, the other thing about Tiger is his new clubs selection! Nike’s decision to get rid of making clubs meant two things. First, they decided to increase the number of clothes they’re going to make with the Nike swoosh, so Tiger, Rory, and now Jason Day will all be wearing that. Second, all the Nike sponsored players need to find a new brand for all their golf clubs! For example, Rory switched over to Callaway equipment a while ago before his injury. Tiger however, hadn’t told people what clubs he was switching to until this (Wednesday) morning! Drumroll please….

After several months of testing and all brands to choose from, the choice is clearly @TaylorMadeGolf. Proud to join the family! -TW pic.twitter.com/Ist3bA5tqN

TaylorMade!!!!!! What’s interesting is what he claims to have done to determine which club brand to go with. Apparently he tested all different brands for several months and eventually chose TaylorMade because those clubs were “better” for him. But why did he actually choose TaylorMade? Like was it the quality of the their clubs that really made him decide to use those from now on? Or did it also have to do with the amount of money and advertising that they’re going to give to him?

Either way, Tiger’s now got TaylorMade drivers and woods, but still has his old Nike irons, rather than switching to the TaylorMade ones that he apparently will use eventually.

Tiger Woods' bag today. Still has the old Nike blades in there. pic.twitter.com/uXj76tOVRh

He’s playing this week, and three other times between now and the end of February, so it’ll be interesting to see when he does switch to TaylorMade’s irons. Also, it’s really too bad that he doesn’t have a TaylorMade golf bag, and I can’t imagine how much Monster drinks pays him to be his sponsor there. I can’t say I’ve ever had one of those drinks before, but damn Tiger, that thing ugly.

However last year, they hired Tom Weiskopf to come redesign the North course to improve the old grass, and the old design that isn’t exactly standard for courses this day and age.

Here’s his quote about how he redesigned the course:

“The statistic I’ve always designed against is this: There are 25 million golfers in the U.S. as defined by the National Golf Foundation. Ninety-two percent of the 25 million golfers do not break 90. Fifty percent of the 92 percent don’t break 100. Eight-and-a-half percent break 90, but don’t break 80. One half of one percent, assuming they play by the rules, break 80. It’s a very hard game.

“We have to get people around here. It wasn’t its purpose for us, to make it equal [in difficulty] to the south. It’s for those who come out and play and we want them to come back and play.”

I’m a big fan of this. 1 round a year for 156 players is a tournament round there, and the rest of the 80,000 are by normal players. Courses can look cool but still be easy to play, and that’s huge. A lot of the time you’ll see new courses, or courses that were redesigned, made to be way tougher because then the course can possibly host more tournaments and increase the cost to be played. Awesome that didn’t happen here. 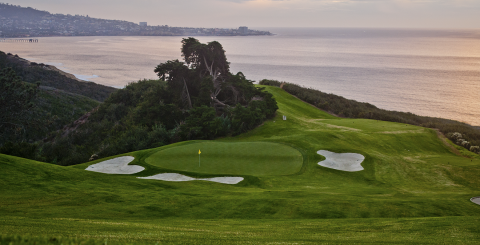 Also check this out. I was searching on google to research what the history of the North course is, and on Torrey Pines’ website where they talk about the course, they say that the tournament played on the courses is the Buick Invitational! It used to be the Buick Invitational sure, but in 2010 Farmers Insurance took over as title sponsorer, so apparently that website hasn’t been changed for 7 years. What a joke. 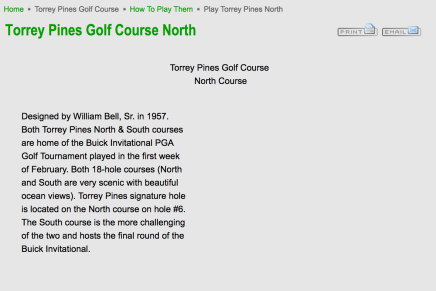 The Rest of the Good Field

Let’s be honest, Tiger will probably kind of suck and play badly. But look who else is in the field this week!

The course is on a cliff right next to the ocean, which means that the air there is perfect for paragliding! Which means you’ll see a ton of them on tv. You know how tv stations love showing random things when going to commercials? Like the last couple weeks in Hawaii where they showed dolphins and whales and swimmers before showing the commercials? You won’t see too many of the swimmers here, but expect to see a ton of paragliders this week.

Check out the pic from this bizarre website. Looks really cool up in the air. 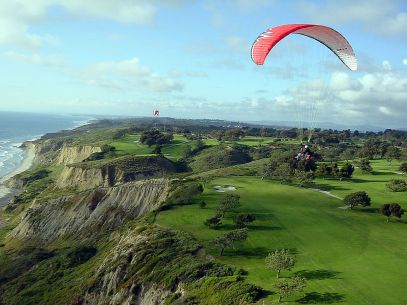