Finally time for another major! No more trying to think up things to watch for during a normal, standard, PGA Tour event. Lots to look out for, but the thing I’m most excited about is the fact that players can’t be complaining about the course! This is the 8th time it’s hosted the US Open, and while it’s well known for being really tough, no chance a player can go and say bad things about the course.

I feel like I first need to give a quick shoutout to Angel Cabrera, who chainsmoked his way to victory in 2007, the last time the US Open was played here. I don’t think I’ve every seen anyone get up to every tee shot and just rip drivers straight down the fairway, and then go to his bag and light another cig.

Shoutout to one of the catchiest songs I’ve been listening to lately. Now that I pasted the link here, I realize that it isn’t exactly a song that you’d use to pump yourself up for a US Open, but whateves, I’m gonna use this song anyway. Also, pretty sure Angel loves listening to this song too.

I’ve never played there, but that doesn’t mean I haven’t watched enough of the course on tv and seen enough pictures to know a little about what’s going on.

Churchpew bunkers — They look like this and you’ll see them a lot this week in pictures and on tv.

Bunkers are made of sand

Lots of rough — As seen in this Keegan Bradley Instagram post. There are a ton of Instagram posts already about how heavy the rough is at Oakmont, I just chose this one because I can point out how Keegan used the letter ‘u’ instead of typing the two extra letters and getting ‘you’. Come on Keegan, u r better than that.

Can u find the ball? #ipromisethereisone #oakmont

Yes this will be a challenge! 😅#usopen #oakmont

Classic US Open Course — Classic not only because it’s hosted the championship the most, but also because it’s sandwiched between two not so classic US Open courses, Chambers Bay and Erin Hills. So it’ll be nice not having to deal with the media reporting player’s opinions on the course, because nobody is gonna be able to go on the record and say Oakmont isn’t great.

No trees — Back before the 2007 US Open, Oakmont underwent a renovation which removed a large portion of the trees. The idea behind the project was to eliminate the shade that the trees caused, and let the grass get the sunlight it needs to grow healthy. See all these trees on the 18th hole in the pic below? Gone this year, shown in the picture below that one. 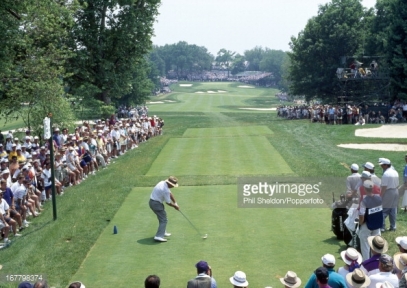 Can you guess where I got this picture from? 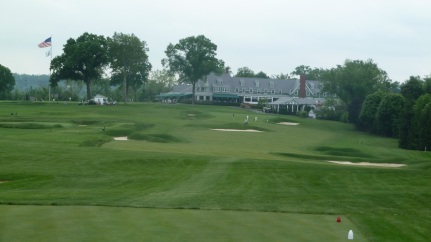 I took this one from Golf Tripper.

Keep in mind here, none of these country clubs started out with these giant trees. They planted a few and, as trees tend to do over time, they grew to be too big. I’m a fan of a more spread out and open view.

The US Open, being a tournament that you can openly qualify for, means that you’ll get a bunch of randos who qualify! Primarily the randos being amateurs. This year there are 11 amateurs in the field. You can see them all by clicking on the amateur tab on the US Open website here. Shoutout to Michigan’s Kyle Mueller, and Illinios’ Charlie Danielson and Nick Hardy representing the Big Ten.

Anchoring the coverage this year is everyone’s favorite announcer Joe Buck!!! No this isn’t football Sundays in the fall, or the World Series. This is USGA on Fox, who got the contract to broadcast all USGA events starting last year in 2015.

Joining Buck are Paul Azinger and Brad Faxon, both solid announcers. Not joining Buck is Greg Norman, who had the classic one night stand with Fox, doing the coverage during 2015 and then getting kicked out of the broadcast booth in the morning of 2016, and never got a text from Fox about meeting up some other time.

Fox got a lot of flack last year for their coverage of the Chambers Bay Open, most of which I thought was undeserved. And because of the complaining, like the US Open, is another great American tradition, I’m sure Fox will have to deal with more criticism this year. But I’m optimistic that Fox will do just fine.

A Crap Ton of TV Coverage

All praise based Fox. According to their coverage schedule, Thursday and Friday will go from 9 AM to 8 PM EST. For those who can’t do time based math, that’s 11 hours of continuous coverage. As much as I like watching the tournament down the stretch, I think I’m more of a fan of the opening rounds. I like early round watching to get a sense of how difficult the course is playing, which of the good players are playing like garbage and will miss the cut, and for the random hole out. Wall to wall coverage on Thursday and Friday is much appreciated.

In a self published article, Fox Sports outlines their “tech innovations” that are in play this year. These include the use of drones which can get pretty loud apparently, shot trackers which aren’t that innovative unless they put them on all of the holes, and then microphones in the holes!

Yes the microphones in the holes are back! If you don’t remember last year’s 72nd hole, it gave some great insight with the Dustin Johnson / Jason Day final group. Jason Day, already at the point of not winning the tournament, asked DJ if he should finish out his 3 footer to clear the stage for DJ’s 15 footer to win. Basically, it was really awkward.

I really do think the best thing the PGA Tour can do for coverage, within reason of course, is allow fans to hear interactions between players, and players and caddies. Hearing those conversations really pulls us into the action. We’ll have to see how Fox uses the mics in the holes during coverage. Could be ripe for abuse, but I bet they’ll use them well.

Unfortunately, I couldn’t find a video of the microphone caught exchange, so here’s a really sad video of DJ three putting to lose. I suggest you don’t watch it, unless you’re a terrible person who likes watching other people fail.

With NBC out for the coverage, that means we won’t be treated to the Johnny Miller show. Since I’ve already told you how I feel about all the other announcers, I’ll just say that unlike a lot of people, I’m a decent fan of Johnny.

The bigger issue here is that Johnny won’t be on the grounds announcing at a site of his unbelievable final round 63 in the 1973 US Open to win. I can’t imagine how cool it would be to be able to go back to a place where you performed so well in the past that people keep talking about it well over 40 years later. Poor guy gonna miss out on all of that. 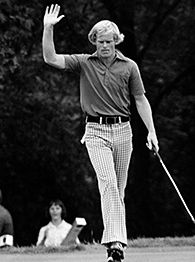 Loving the pants, loving the flow

I guess it might be a good thing that NBC and Johnny aren’t doing the coverage, because I know NBC would just love to keep bringing up that win by their lead announcer. At least now we know the coverage will focus on the current tournament and current players with the appropriate amount of history.