Lucky me that Southwest offers free TV streaming their flights so I was able to watch James Hahn beat Roberto Castro in a playoff for the Wells Fargo title. Even with that three putt to go into the playoff, Hahn was really impressive. Also, after seeing him hit those drivers on 18 in regulation and in the playoff, I’ll put him in the top 5 best swings on tour!

This week, in case you’ve been living under a rock, is THE PLAYERS Championship, which for some reason is in all caps according to the PGA Tour. I’d kind of understand it if just “PLAYERS” was in all caps, but why does “THE” need the capital letters? I don’t know the answer to that question, but if you want to know why the wifi in the clubhouse be called “Better Than Most”, read on.

I mean, what else would the wifi be called at The Players Championship? pic.twitter.com/c55W94nCg8

But first, some music. This week, I’m featuring the ride music for the Disney Sea Sinbad ride that we went on in Tokyo! No idea what they’re saying, but I assume it’s something about how badass Sinbad and his pet tiger kitty are.

Thanks to the excellent marketing team at the PGA Tour, who all actually work in-house rather than being outsourced, have made the Players and TPC Sawgrass one of the most iconic golf courses they played on tour. Of course, designer Pete Dye probably had something to do with that as well.

The course started as the brainchild of then PGA Tour commish Dean Beman who wanted to have a permanent host for THE PLAYERS. He was able to buy the land for TPC Sawgrass for just $1 since the land was all swamp and marsh. But because of that, the course would have to be built from scratch rather than using the contours of the land as a starting point. Beman ended up choosing Pete Dye to design the course, which was perfect because Pete Dye just comes up with course designs on his own anyway!

The course ends up being really unique — and I mean unique in a good way, not unique that some people say to mean weird. Every hole is distinct, and clearly it holds up to the best players in the world. I’m sitting here trying to think of how else to describe the course without going through every hole in detail. I guess that says something about how cool the entire course is.

Finally, when they’re saying it’s the “Stadium” course, they really mean it. The course was built with these mounds along most of the fairways which let spectators see the action without needing to build grandstands all over the place. The most notable of these is the amphitheater around 16 and 17 (seen in the picture below).

The island green 17th gets a special section here, just because of how famous it is.

It also has an island tree!

I know you’re going to hear this story a million times this week from various parts of the media, but what apparently happened is that Pete Dye used all the dirt around that hole to shape the rest of the course, that by the time he got back to finishing the 17th hole, he had nothing left to use! His wife, Alice, said something along the lines of  “Screw it, fill that crater with water and make it an island green”. But probably in a nicer way. And thus the 17th was born.

Also of note, the hole is only 140 yards long and the green is pretty large if you’re aiming for the center of it. Especially with a wedge in your hand. In my 4 times playing the 17th hole, 3 in competition, I never once hit it in the water. I did hit it in that bunker once though, so I can’t claim to never have missed the green.

What Does the Winner Get?

Because it’s the headline event for the PGA Tour, the winner gets a little more than normal. Here’s a quick rundown of the perks for winning.

And they also get a plaque on this sort of Ring of Honor at Sawgrass! Probably something they care about least.

Tiger announced he wasn’t playing this week, which is funny how that is news. But Tiger does deserve a shoutout for 1) being Tiger, 2) winning the Players Championship in the past, and 3) winning one of his US Amateur titles (the middle one) at Sawgrass! Tiger was still in fist pumping form back then.

And yup, he totally rocked that hat all week.

Also, what an amazing Golf World cover. Tiger with the fist pump as an amateur, and MASTERS BANS McCORD. Remember how Gary McCord was banned from announcing the Masters because they were “not comfortable with his style”? Maybe he shouldn’t have mentioned “bikini wax” being used to make the greens lightning quick.

If you had that magazine tucked somewhere in your basement, get that thing signed by Tiger and Gary. Would be a great mantle piece. Getting that signed by Bert Yancey however, might be a little difficult.

Speaking of Tiger as Sawgrass, he was also a part of one of the best calls in Players history — Gray Koch, with “Better Than Most”. Remember that wifi network from the top? That’s what I’m talking about.

And then as I thought about it more, the Players does have more than a few memorable moments. Moments that are shown over and over not only during PLAYERS week, but during the rest of the year as well. I’ll run through a few here so some of the less golf literate people can get the references this week.

Tiger in 2001 on the 17th hole. Putt from the back of the green to the front portion is quite slippery. You’re not about to putt it into the water, but still that might be in the back of your mind. Clearly it’s a difficult putt too considering Gary Koch went with for “better than most” to describe it, implying that the other putts kind of sucked.

I like the call, but apparently QuarterDimeNickel in the comments section doesn’t think it’s that cool.

Be the right club today…. Yes!

Where is Hal Sutton these days anyway? Last thing I remember of him was being captain of the Ryder Cup a few times ago (I can’t even remember which course that was at) and poof he gone.

In one of the last years with crappy March weather, before they moved the tournament to May, Fred Funk took down the field, and celebrated by throwing his hat awkwardly on the ground. Being 48 at the time made it that much more impressive. Sorry, you’re going to have to go external to pgatour.com to watch this video, but it’s worth it to see the most dad celebration ever.

Alright, he deserves a mention. His shots on 17 in regulation and in the playoff were dirty. Standing over that shot with water all around to a tucked pin that you can’t see the bottom of, and putting it to 5 feet. Yeah. I’ll watch that shot over and over.

Also of note, but with no video is:

Adam Scott and his baby face and poofy hair in 2004 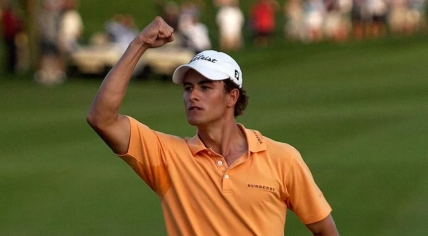 Top Players Roundup — What to expect from the big names

Fowler — Fowler didn’t win last week despite the 54 hole lead, and it’s not the first time that happened. He also folded the last few holes back at the Phoenix Open on Super Bowl Sunday this year. It’s tough to get a sense of whether or not Fowler can handle the pressure since those failures are offset by things like last year’s PLAYERS where he went on a birdie barrage to finish and then won in a playoff.

Spieth — Fold at the Masters, party in the Bahamas, back in action this week. It’s really impressive how he’s been able to shrug off the Masters finish to the point that everyone is talking about the bro trip to the Bahamas rather than his play. Guess I now know what to do if I ever play bad golf when everyone is watching — Go get hammered on a tropical island and snapchat the entire thing.

Rory — Great final round, minus the first and last holes at the Wells Fargo. +2 on those holes, -8 on the rest. This brings up the consistency of playing great in some rounds, but garbage in others. Why does he do that? We’re all just sitting here waiting for him to play a tournament where all 4 rounds are as good as his final round was. I’m tapping my toes impatiently.

Dustin Johnson — Speaking of forgettability, where the hell has DJ been? I can’t remember the last time he contended, or even played in a tournament. Luckily, I’d say he has the most natural talent outside of Rory, so he can play well at any moment.