Out of PGA Tour tournament limbo and finally back to quality fields this week at the Wells Fargo Championship. Hopefully we’re back to a regular schedule as well because I’m sick of having to watch last years tournament while the current one is in rain delay. On the other hand, thanks to Rickie Fowler and his snapchat, we now get to see what everyone is doing inside the clubhouse!

Music for the read. Pronounced “Dollar Sign Dreams”. Cause yeah.

Quail Hollow Club, just outside of Charlotte, NC, is listed at 7,575 yards par 72 and has something we haven’t seen in awhile — a named stretch!!

Frequent readers of GOTM know how I feel about named stretches — they’re gimmicks that come from marketing departments to give fans something to talk about and watch for. This week, Quail Hollow’s final three holes, are called the “Green Mile”.

I was curious where and when the nickname came into being, so a quick search came up with this article and a quote. Keep in mind, the tournament came to Quail Hollow in 2003, so this is probably from 2005.

Just two years into the Wells Fargo Championship, the closing holes have borrowed a nickname from prison slang, “The Green Mile.” If their combined distance of 1,175 yards is a long par-5 short of a true mile, there is, at least from a tournament player’s perspective, a correlation to the last walk death-row inmates take.

“But not at Quail Hollow.”

First off, you can tell how old this article is if they’re talking to John Cook who is now 58 and plays every once in a while on the Champions Tour. Second, if they’re talking about how it’s harder than Sawgrass, clearly this was before the redesign that lengthened the Stadium Cours. Now Sawgrass is probably more difficult coming down the stretch. Green Mile or not, you can expect players to make a few bogeys down the stretch coming in. 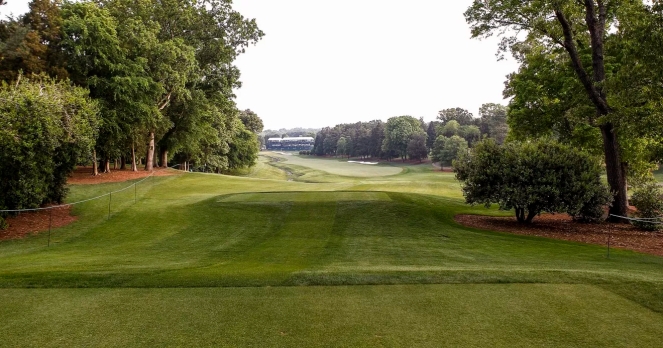 Finally, Quail Hollow will actually host the PGA Championship next year, and then the Presidents Cup in 2021. I’ve never been too big a fan of majors hosting tournaments on normal PGA Tour courses. I want to see something different! (USGA, don’t host the US Open at Torrey again please.) But I guess it plays to the quality of a course if the PGA of America wants to host the tournament at a normal PGA Tour course. It’s all about the money remember. Either that of they think they can make more money there than at a different venue!

The man who once wore pajama shirts on the golf course is back! After having surgery on his left wrist in January, Furyk has been out of competition since then. When asked by pgatour.com what his recovery has been like, he responded: “I’m starting to play a little golf again. I’ve been a little cautious about trying to play a bunch of days in a row, really trying to bring it along … cautiously.” Not exactly a quote you’d expect to hear from someone about to start his year on the PGA Tour.

Oh Jim, you don’t need all those buttons.

He currently sits at 24th in the world after tumbling all the way from 7th at the end of last year. Furyk is 45 and having to return to golf after a wrist surgery is tough at any age. Wonder if he has the stamina to get back to top form. Furyk’s been a staple of high finishes the last few years, and even at the end of last year, he finished 4th, 3rd, 30th, 11th, and 4th again before having to WD at the BMW for his wrist. Damn, Jim, you were good.

I’m curious to know his goals for the year. Probably not the Olympics (but at least he doesn’t have to worry about the crappiness of Rio!), but I’d say the Ryder Cup is still on the radar. It’d be an odd Ryder Cup with no Jim Furyk.

When the Tour plays in Arizona or Florida, it isn’t really news when players live close by. But turns out there are a decent number of players who call Charlotte, NC home, and at least one who is a member at Quail Hollow. I’m talking Webb Simpson! Webb proved his local knowledge by finishing T2 last year.

Five other Charlotte residents are also in the field this week: Brendon de Jonge, Jason Kokrak, Martin Laird, Kyle Reifers and Johnson Wagner. Hmm, maybe if you’re playing Draft Kings or something like that, you might want to go with some of the hometown talent.

No rain please. I’ll take a hard pass on that.