PGA Tour Live is incredible. Offered by PGATour.com, this online streaming service provides coverage of featured groupings on Thursday and Friday of a tournament and streams featured hole coverage through the weekend.

PGA Tour Live costs $39.95 for an annual subscription. This is stupid. I am vehemently against the idea of charging users for these additional features. I remember back in the day when Yahoo Sports first got their StatTracker for live fantasy scoring they charged $20 to use it for the football season. I hate this. Just offer it for free, maximize your subscriber and viewership numbers, and utilize those metrics to charge sponsors more for advertising on your website.

Fortunately for the websites that charge for these features, I am not a man of strong principle and, just as I did when StatTracker first came out, I gave in an purchased PGA Tour Live. On Sunday morning of the WGC Cadillac Championship this additional coverage brought such incredible golf that, were it possible for the $40 cost of subscription to be justifiable, this would have justified it.

I booted up PGA Tour Live coverage at 9:50 EST. Branden Grace, playing alongside K.T. Kim was given clearance to tee off and hit his drive into the fairway bunker. Suddenly, as Grace was set to leave the box a Rules Official approached the tee box and pointed out a man who had appeared in the fairway only 150 yards from the tee box.

After a few moments trying to figure out who the man was and how the hell he emerged to that location they realized that it was J.B. Holmes in the group in front of them. Grace sarcastically asked the Official if he could re-tee because they shouldn’t have gone but the official was having none of it. They realized that the reason Holmes was so far out of sight and out of mind that they accidentally allowed the subsequent group to tee off was that Holmes hit his tee shot so far left that he went into a water hazard that I, admittedly, didn’t know existed. I have watched this entire tournament and had never heard a single mention of a water hazard being a danger off the tee. I looked up an aerial view of the hole and figured out why . . . 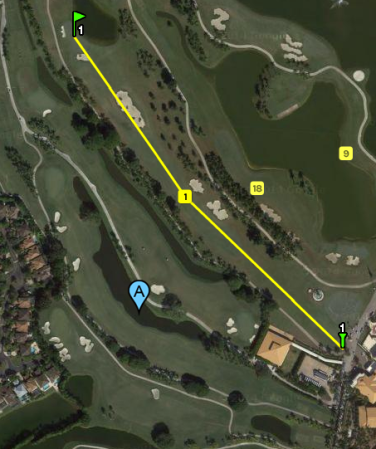 Water hazards on a different course shouldn’t come into play

Holmes hit his drive so far left that it went across a hole that is not a part of the 18 hole course they’re playing and into a lateral water hazard. Holmes dropped, played his shot from the drop location back into the fairway of the 1st hole, hit his next shot up to the green, and seemed ready to take his medicine and walk to the next hole.

Then, things got wonky.

Suddenly, from the green, Holmes called over a rules official and had a quick discussion. Then, Holmes and his caddie jumped into a golf cart and started heading back up to the water hazard he initially hit into. He dropped again from the other side of the hazard, played another ball into the fairway of the first, and had the least fun cart ride in PGA history. 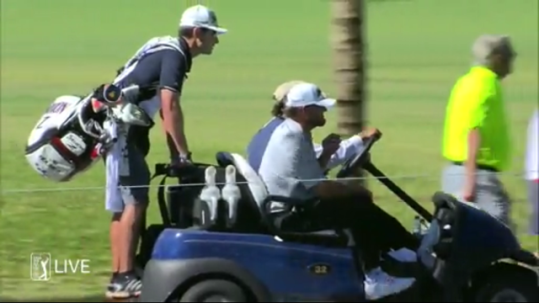 The hole had turned into chaos. The commentators were struggling to figure out what was going on and why Holmes redropped and were filling time by discussing the tour’s new rules regarding disqualification on misrecorded scores. Grace and Kim were hanging out in the middle of the first hole, unsure what to do. Emiliano Grillo, in the 10:00 AM tee time was chilling at the tee box, unable to tee off. By the time Holmes his his chip onto the green no one at PGA Tour Live had any idea what shot he was on:

Officially listed as Holmes’ ‘??’th shot on the hole

Finally, the commentators figured out what went wrong. Among Holmes’ options in the lateral water hazard was the following drops (From Rules 26-1):

Holmes went with the ‘opposite margin of water hazard’ choice but incorrectly played his initial drop at a point of sight location, a mistake he didn’t realize until he got to the green, forcing him to go back and redrop.

28 minutes after teeing off Holmes made a nice putt to get up and down from the fairway. The cherry on top for the hole was that the commentators declared he had gotten up and down for bogey…

…however, as I looked up Holmes’ scorecard in writing this post I noticed that it had been  changed to double bogey. . . at least for now. 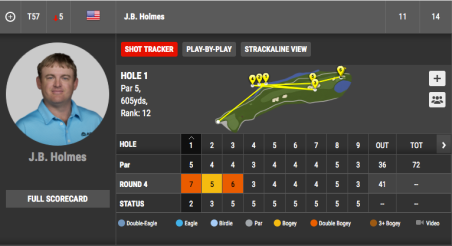