Throughout this whole election season, I’ve been pretty good at ignoring the candidates and the 24/7/366 (happy leap day!) news cycle. Unfortunately, as I sat down to write this preview, I realized I couldn’t ignore it any longer. Because this week, the WGC Cadillac Championship is being played at … Trump National Doral. Yup that Trump. Luckily for everyone out there, I decided to not put a picture of the man in this article, and this is the only time I’m going to mention him specifically. I for one, believe GOTM should be a PFZ — politics free zone. This is something increasingly rare in modern culture, so enjoy it.

Now time for the music. Last year I used the standard Billy Joel Cadillac-ac-ac-ac song, so I figure I’ll just go with one of the more catchy songs I’ve been listening to recently. Also since they don’t have a music video out yet, I’ll use the soundcloud stream.

Here’s what to watch for.

All the top guys

Invites to the Cadillac Championship are given as follows.

What this means is viewers are treated to one of the best fields outside of a major. 48 of the top 50 in the world will be in Miami, only Jim Furyk (wrist injury) and Thongchai Jaidee (sickness) won’t be making the trip.

Guess that’s what happens when you drop money on money at the players, with the winner getting a stout $1,612,432.

Random players making bank, even if they suck

With no cut, everybody makes money!

The WGC events are cool because they give openings to top players on “random” tours to play against the best on the main tours – a place where every pro golfer hopes to be soon. Take a look at invite criteria 6-9 to see what I mean.

It’s very unlikely that any of those players would play well enough in this one event to springboard to the PGA or European Tours right away, but the experience and the money certainly are great for them. Last place in 2015 at a solid 315 strokes was Hiroyuki Fujita, earning him $42,250.00. Not a bad deal at all, even if Mr. Fujita didn’t play as well as he had hoped. 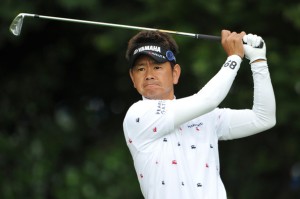 Big hitters and a tough course

At 7,543 yards, par 72, TPC Blue Monster is, well, a monster. Just look at the top 5 from last year’s event. Dustin Johnson, JB Holmes, Bubba Watson, Adam Scott, and Henrik Stenson. And Stenson is by far the worst of that group averaging 296.4 yards in 2015.

Obviously this wasn’t always the case, but since 2012, over $250 million have been spend renovating the course and facilities. Gil Hanse (same guy doing the Olympic course later in the year) turned a relatively benign course into something way more challenging, and that short hitters can’t compete on. We can get into arguments about whether it’s more fun to watch birdies than pars or bogeys, but Doral is definitely a championship course now after the upgrades.

On a course where most of the holes all blend together, Doral does have a couple that stand out. The first being the 10th. A 551 yard par 5 that doglegs left around a giant lake is definitely one to watch out for. The green is reachable in two, but how easy that is depends on how much you take on the lake with your drive. It’s simple to just bail out to the right and play it as a three shot hole, but some of the guys I’m sure will cut it close, because nobody likes a three shot par 5.

If you really want to waste 8 and a half minutes, watch this video of Stewart Cink play and talk about the hole. This video also looks like it was made in the 1980s.

Also, the 10th hole is famous according to google! Being one of the autocompletes when you type in “10th hole at”.

The Return of Jason Day

The Cadillac Champ will mark just the 4th event of the year for Jason Day.

He really has become sort of the forgotten top player. All the talk of Spieth and Rory missing cuts, Rickie winning, then collapsing a couple times, Bubba winning, Dustin Johnson and Adam Scott in the mix (and Scott winning finally last week), Jason Day has been sitting in the backseat, presumably just chilling in Ohio. This, after not playing much golf at all during the offseason.

Also, his wife was destroyed by LeBron while they were sitting courtside at a Cavs game in the offseason too. Just wanted to bring that up again.

Not practicing is an interesting strategy, especially when there finally seems to be a good contingent of young, hungry players, something we haven’t seen in a few years.

Secret Tour Pro called Day out and predicts there’s a little David Duval in him, meaning really really good for a little, and then falling off the planet and landing as a commentator on the Golf Channel.

Has a hint of David Duval about him IMO. https://t.co/VQ1yiUl6E8

Jason knows his body, his game, and what he wants to do. PGA Tour golf can be a year round, 30 year profession. If he wants to take a rest and be with his family, I’m not going to be able to sit in this chair and say he’s wrong. Maybe STP can since he’s out on Tour, but not me.