I dedicate this preview to all the Hondas that have been through my family throughout the years. Pour one out for the red and grey Hondas of the past. But the tan and blue Hondas’ pistons are all still firing. I also was going to add a picture of one of those cars, but all we could find is a picture of 16 year old me in front of the tan Honda after getting my drivers license, and a picture of 18 years old me in front of the blue Honda on my last first day of high school. And no chance I’m going to put either of those pics up on the internet.

Now for some mood music: (Ha didn’t realize that the video was so weird. Don’t watch if you’re epileptic apparently.)

And now on to the golf:

Done with the west coast swing, the PGA Tour is off to Florida and the Florida Swing? Maybe next week I’ll have come up with a better nickname for these next four events, all of which are in Florida. Seems to me like there are two parts to a named stretch. The first part where we establish our location. And the second part where we talk about what we’re doing in that location.

Second parts are easy. Swing Stretch are all appropriate. So I’m just going to focus on the first part of a nickname. Without further ado:

Sunshine Swing (like the alliteration, but way too boring)

It’s a Gator, not a Croc Swing

Houses Along Every Single Fairway Swing

Luckily, we have a few weeks to whittle the list down to the best of the best. Expect a twitter poll coming.

Johnny Miller! David Feherty! Gary Koch! Not Gary McCord! All things to expect this week from the announcing crew over at NBC / Golf Channel. In all reality, I’m pretty fine with all the announcing crews in golf (yup even my boi Joe Buck). Though I would say Jim Nantz could be good to get a little more pumped at some times in final rounds. Subduedness is cool for Augusta when the crowds provide a lot of the roars, but normal events need a little more color. Get excited Jim!

Anyway, the NBC crew is back in action, and with that means no half hour break between the early Golf Channel coverage, and the main show on NBC. With CBS and the like, there was a half hour of no golf action on Saturday and Sunday just before CBS went on the air. But since NBC owns the Golf Channel, us viewers won’t have to deal with that garbage rule, and will get uninterrupted coverage when switching from the Golf Channel to network.

With NBC covering all of the Florida tournaments, that adds up to 2 rounds *30min * 4 tournaments = 4 more hours of PGA Tour golf in the next four weeks!

Weather + no state income tax means a lot of guys call Florida home, and the Palm Beach Gardens area definitely ranks up there in terms of PGA Tour player density scale. In fact, 19 guys playing this week have a home within 45 minutes of PGA National. Too bad Tiger isn’t playing because his presence would turn that stat into an even 20!

Being able to stay at home for a PGA Tour event when you’re normally on the road definitely has to be a blessing. I don’t buy the argument that being at home causes players to lose focus, and that hotels are better at getting rid of distractions. If you’ve ever been to a Tour event, there are more than enough distractions. Being at home is a help.

Just like every section of of the PGA Tour needs a name (West Coast Swing, whatever we come up with for this Florida stretch) every course needs a named stretch of holes. And this week, it’s the Bear Trap! The 15th, 16th, and 17th holes here at PGA National are particularly treacherous.

Instead, all they have is this bear statue and a plaque

In my opinion though, it’s cheating that two of the holes are par 3s with water. First off, as soon as you dump it in the water on an approach shot, you’re usually looking at a longer shot (100 yards or over) hoping to get up and down for bogey. Secondly, par threes mean you’re hitting a longer shot into the green to begin with. Granted in this case, 15 and 17 aren’t particularly long for par threes, 179 and 172 yards respectively, but that still means players are hitting 7 irons into these greens. 7 irons and tiny greens with water are hard on their own, and it doesn’t have much to do with the design of the course. /rant

Then again, I’m a fan of drama, and these closing holes definitely help bring that about.

I figure as much as I crapped on the 15th -17th holes, I should mention how the 18th hole is really cool, and I’m not just saying that because it’s a par 5, or that it’s the final hole on the course. The hole has a decently large landing area off the tee, but hugging the left side is important if you’re thinking of going for the green in two. Pull it left and you’re in the bunkers, right and you’re probably safe from the water, but you’ve got a long way home.

Listed at 556, it’s definitely reachable if you hit the fairway on the correct side, but in the rough or too far right, and you have quite the layup, which I think is the most interesting part of the hole. The fairway snakes around the lake to the left, and narrows considerably just in the place you’re looking to position your third shot. So players are left with a decision not oft seen on tour: how far am I willing to push my luck. Lay back for a longer third shot but better chances of being safe, or try to push it up for a wedge on your third, but bring the water and bunkers more into play.

Below is the best picture I found of the hole. You can see how there’s room around the green, but trying to layup in that neck area close to the green is a tough shot. Aiming further back to avoid that trouble and a really high number might easily be the play. 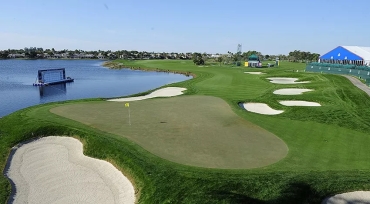 I’m kind of reluctant to devote giant sections for all the individual players to watch for, so I’ll just make a list here.

Back in action after the loss at Pebble, and curious how everything went in his week off. If you haven’t listened to our recent podcast, us at GOTM have flipped on Phil, and now are big fans of him this year. I really have no excuse for past me not wanting Phil to win, now I think I see something that’s really different in these times – a person who always says exactly what he’s thinking.

During the coverage at Pebble, CBS showed a series of clips from Phil’s post tournament interviews over the past six or so weeks. Basically it was Phil saying that he was close every week, but getting better and improving. First, you don’t really see players speaking what’s actually on their minds. Especially when they’re playing badly like Phil was. I would say this is because he’s 45 now, and older people tend to lose their filters, but Phil’s been telling us his thoughts forever. He’s made it clear he wants to make the Ryder Cup team on his own accord this year, and big props for him setting such a public goal given the uncertainty regarding whether or not he can achieve it.

He has history at the course as the Honda Classic is a common event on his schedule. He’s won in the past, and also lost in a playoff to Russell Henley a few years back. Vegas says he’s the favorite this week, so how’s he going to bounce back after an atrocious final 17 holes at the Riv?

Also, Rory’s last win came in May 2015! That’s a loong time for someone who’s been the number one player in the world. Granted you gotta throw in a couple months off from that futbol injury, but still, for as much as he’s in contention, I want to see him win more.

Finally, check out Rory’s official website. You know what, I’m just gonna take that picture and put it right in the article here.

Damn son, look at the vein

Even though Vegas says Rickie is at 11/1 one to win this week (Rors is at 11/2, twice the chance to win), I’ll still say Fowler has a better chance at winning. As dumb an indicator as it is, Rickie seems like he has the best attitude on the course. And attitude of wanting to win. Also, Rickie’s gotta do well to get back to number 4 in the world! Bubba’s win last week bumped him out of that spot, and you know we’re not gonna call it the Big 5.