Turns out it’s really hard to figure out how to spell the sound that JK Simmons and company do in the Farmers Insurance commercials. I’m also realizing that I haven’t seen those commercials in a while, so here’s an example to refresh your memory bank.

Feel free to leave that on repeat while reading this preview. Definitely would add to the experience.

Here’s what to watch for.

For those who’ve been reading my previews for a while, you should know that my favorite thing to do is mention Tiger when in all reality, he has no business being mentioned. But Tiger’s history at this tournament, and his performance at the US Open in 2008 at Torrey Pines, make mentioning him a requirement.

Tiger has won the Farmers Insurance Open 7 times, including 4 in a row from 2005-2008. Throw in a US Open in 2008 as well and he’s won at that place 8 times. Absolutely absurd given the talent on Tour.

It’s an interesting thought trying to figure out why a certain player always performs well at a venue. Layout makes a big difference, not necessarily knowing where to hit it, but also being comfortable with the looks off the tee; it’s tough to force visual comfortableness. Another factor is the grass type. Tiger grew up in Southern California where the kikuyu grass is all over. Knowing how the ball is going to react out of the rough is a big help. Or maybe, he just wanted to please his Buick overlords, considering this event was the Buick Invitational for 6 of his victories.

So watch this week for mentions of Tiger, and I’m sure you’ll see him limping around in clips of the final round or playoff at the US Open.

A full field event of 156, but again, don’t expect to see the normal tee time schedule of double crossovers until the weekend. The first two rounds will be split between the “championship” South course that can be stretched to over 7,600 yards, and the shorter North course, topping out a little over 7,000 yards.

It’ll be important to check which course the leaders are playing after the first round. Expect most of the top guys to be from the North course.

The 18th hole at the South course is pretty distinct in tournament golf. A reachable par 5 with a pond right in front of the green. Before the 2008 US Open at Torrey, that bank had rough on it which stopped balls from trickling into the water. Not anymore! Wedges into the green with a little zip can easily trundle into the pond.

Note the lack of rough 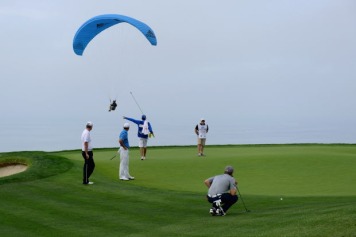 I wonder how many crashes there have been in tournament history?

DJ gets a special mention here. Fresh off the report that Dustin Johnson turned down $2.5 mil from some rich people in the middle east who wanted him to fly over there and play golf in the desert, DJ’s set to tee it up at the Farmers, the first PGA Tour event of the year for him. Curious to see how he does with him knowing that his wallet could be significantly more heavy. I’m guessing he’s gonna play just fine.