Fresh off another dominant Spieth performance, we move over an island, and to Waialae Country Club.

We’re also trying out a new style for the tournament previews here at GOTM. Where last year had snippets about the sponsor, what happened last year, and the course, this year will feature one section: Why you should care.

Former world number one golfer Adam Scott hasn’t exactly been keeping his form over the last year or so. And this year is going to even tougher on the Aussie with the ban on long putters.

His play and the putter rule change also allowed Scott to drop all the way past the 14th spot in our recent year long fantasy draft, so I snagged him with my 15th pick. Talk about value drafting. #moneygolfball

Honestly more weird to see him with an Odyssey putter than just a short Scotty.

Not necessarily what to watch for, but when to watch for, and I’m talking Prime Time! Nothing beats being able to get home after work and have live golf on the docket. On the Thursday and Friday telecasts, expect to see the top players coming down the stretch at a tough 17th hole (see below for more information). When the weekend rolls around, look for the Tour to schedule the golf to finish around the NFL playoff schedule. Gotta say I was really impressed on last Sunday how right after the Pack crushed the Redskins, the final round of the Hyundai was just heating up. Expect this week to be no different with scheduling around the NFL divisional games.

Last year Jimmy Walker gagged away the Hyundai ToC before coming to the Sony. And like a true professional, he quickly put that failure behind him, dominated the first two rounds, and cruised to a 9 shot victory at Sony. This leaves Walker with a unique opportunity — winning the same event three times in a row. There have been 21 instances of a player winning an event 3 times in a row, so this achievement would not be unprecedented. But still impressive territory if Walker can pull off the win.

He didn’t play that well at the Hyundai this year, finishing middle of the pack at -15, but with guys as good as on tour, one week of mediocre play does not indicate poor play the next. Clearly Walker likes Waialae, so I expect him to at least contend.

Waialae Country Club probably doesn’t rank all the way at the top of “Best PGA Tour Courses” lists. Designed by Seth Raynor, who’s credited with designing other semi-well-known courses like Blue Mound Golf Club in Milwaukee, Fox Chapel Golf Club in Pittsburgh, and Chicago Golf Club in Wheaton, Il (and you thought it was in Chicago), the course definitely has a classic feel even though it might be hard to see from a tv broadcast. Take this caddie’s interview about the strategy of the course, and how it’s one of the few remaining that require strategy. Golf, as with sports in general, are way more fun when you’re in tune with the strategy involved.

From the club’s website, you can see how Raynor modeled more than a few of the holes after famous holes from european courses. For example, the 1st “hole introduces features of the 17th or Road hole at St. Andrews in Scotland.” And the 17th “hole is patterned after the famous Redan hole on the North Berwick Golf Club in Scotland”.

Watch for that 17th hole during the stretch run of the tournament. Taken from that wikipedia article, “Take a narrow tableland, tilt it a little from right to left, dig a deep bunker on the front side, approach it diagonally and you have a Redan” Par 3 also means a longer iron for the approach shot, along with this tough green to hit with it running away from the player. Could easily make or break a round.

Those dumb palm trees that look like a W

Just cause they’re going to show them a lot, there are palm trees in the shape of a W in the back of the 16th green. 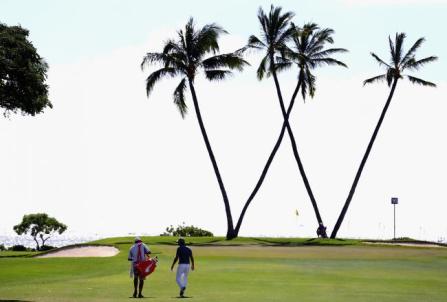