Only two weeks left in the season, we’re down to 70 players left as well. No cut, only the best, who’s gonna come out on top in Chicago?

I’ll be honest, in my 25 years, I never once thought to myself, “I wonder what BMW stands for.” So if anyone out there knows off the top of their head, I’ll be impressed. For everyone else, it stands for Bayerische Motoren Werke. In American, Bavarian Motor Works, which makes complete sense.

As with many older companies in Europe, BMW became BMW in part because the result of one of the world wars. When Rapp Motorenwerke was forced to restructure following the treaty that ended WWI, they ceased making aircraft engines, and shifted towards motorcycle and automobile engines. This treaty didn’t do much good, since when WWII rolled around, they were back to making aircraft engines again.

The rest of its history is littered with buying little car companies and stuffing their engines in them, to put it mildly. Which is really kind of interesting because it shows that BMW isn’t really a car company, but rather an engine company. I kind of wonder how many other car companies are really different behind the veil. Guess more of them are going to have to sponsor golf tournaments for me to find out.

The rich history of the BMW Championship goes all the way back to … 2007, the first year of the FedEx Cup. Well not really, since it’s merely renamed version of the actually storied Western Open which dates back to 1899. The BMW is still run by the Western Golf Association, but really it isn’t the same event at all.

They also run the Evens Scholar program too

Back in the good old Western Open days, it was a “normal” PGA tour event, but was considered top tier. Tiger won it 3 times when it was the Western Open, and if you’re getting Tiger to play, it’s automatically top tier (except maybe this year’s Fry’s). For the most part, the Western Open was played at Cog Hill (Dubs Dread) in the Chicago area, which has now undergone a facelift in hopes of getting a US Open in the future.

Now, the BMW is thrown around on a bunch of different courses, not necessarily in Illinois, and even outside the Midwest. It’ll be staged in Indiana in 2016, and moving as far away as Philadelphia in 2018.

The BMW this year is being played at Conway Farms Golf Club, located in the northern suburbs of the ok city of Chicago.

Now I’ve been able to play a decent number of the courses in northern Chicago over the years, but Conway Farms isn’t one of them. Luckily, I do have inside knowledge of one of the holes on the course. Well, at least one of the approach shots. I’m talking about hole 11. The approach shot to the green (not really sure if it’s a par 3, par 4 or par 5, but I’m thinking par 4), forces the player to hit across a lake / pond that sits in front of the green. Short and left would be fine because the fairway wraps around to the right, but a lone bunker guards the front left. Anything short and right leads to a watery grave. Beyond the green is a pasture of sort, where horses sometimes graze, though I doubt that will be the case during the tournament where crowds will pack the back of the green.

How do I know all this you wonder? It’s because there’s a picture of the 11th hole above the toilet in my girlfriend’s bathroom, so every time I go to pee there, I get to stare at it. I took a picture of that picture so you all can see what I’m dealing with. 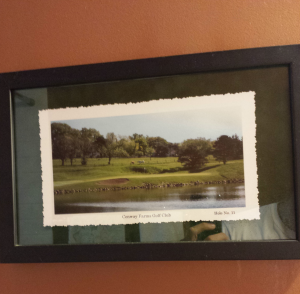 Yup that’s my shoulder and hand taking the pic

You can take a look at the rest of the course in pictures here, and even see if the 11th hole I know matches the 11th hole according to pgatour.com.

The 2014 version of the BMW Championship played out in Colorado saw Billy Horschel shoot a third round 63 to put him in perfect place to cruise to victory on Sunday. This was the first of two consecutive wins for him en route to the FedEx Cup and a cool 10 mil to go along with the ~3 mil for winning the two events. Not bad for a couple weeks.

Also of note was Morgan Hoffman shooting a weekend 63-62 to finish third. If only he didn’t dick around the first two round with a pair of 72s. What could have been.

Who’s #1? — As has been the case for a few weeks now, we’ve got quite the competition for the number 1 ranking in the world. Rory took it back in the off week, but Spieth is right behind even with his two missed cuts. Also a possibility is Jason Day taking over the top spot. After decades of pretty much having a consensus #1, I’m sure the media is loving having three contenders battling to be best in the world.

Second guessing — With Phil Mickelson and Bill Haas being selected to the President’s Cup team, and Brooks Koepka and Billy Horschel being left out, I’m sure there’ll be plenty of talk about who should have been picked if any of these guys play well / poorly. Maybe waiting until closer to the actual event before picking the teams would be a good idea?