Aww yeah Tdubs is back. Theme of the week is how the PGA Tour and FedEx have finally won. Tiger playing this week means that he cares about the structure of the playoff system enough to play in a new event. So congrats to that. Greensboro, and the Wyndham Championship are here.

It’s been a while since we’ve had a hotel be the title sponsor of an event. Last one I can remember was the Crowne Plaza, and since I lack the will to open up the 2015 Tour schedule, that’s the final answer. Now like most giant companies, the Wyndham name is both the name of a holding company for a bunch of different hotel chains, as well as a hotel brand itself. Wyndham Worldwide is the holding company name, and their brands (excluding the ones that use the Wyndham name) are Baymont Inn & Suites, Days Inn, Howard Johnson’s, Knights Inn, Microtel, Ramada, Super 8, Travelodge.

The history of the Wyndham name goes back to 1981 when Trammell Crow, who incidentally wins the award for oddest name I’ve typed out in a while, named it after his friend and reporter, Wyndham Robertson. I have a feeling that Mrs. Trammell Crow probably wasn’t too pleased that her husband named a hotel brand after another woman. Apparently not since the Trammell Crows were married 67 years before the guy kicked it.

After its founding and subsequent growth period, following the chain of ownership for the brand becomes rather confusing. According to the allknowing Wikipedia, it appears to have changed hands 3 or 4 times before ending up with something called Cendant, which then spun off it’s hotel business into something called Wyndham Worldwide, the current sponsor of this week’s event.

And that’s all I have to say about that.

Ahh the Greater Greensboro Open. Yet another tournament where the local city’s name gets thrown to the side for the money of a giant company. Well considering the tournament wouldn’t exist without that money, I’d say that’s a good thing! Impressively, it took until 2007 before the GGO took on a new corporate title sponsor, later than most of the other tournaments named with their local area.

The tournament started back in 1938 (so it’s been around a decent amount of time), and actually was played at the current course of Sedgefield CC, along with another country club in the Greensboro area. In 1977, the GGO shifted over to Forest Oaks Country Club (sight of the author’s best 36 hole day in his college golf career), before finally moving back to Sedgefield in 2008 when the sponsorship flipped to Wyndham.

Finally, you can’t go mentioning the GGO without mentioning Sam Snead, who won this tournament 8 times in his career, a record (number of wins at an event) unbeaten today cause Tiger decided to suck it up recently. Maybe Tiger can get some mojo from Sedgefield and start winning again.

Lovely Sedgefield Country Club. The only Donald Ross course in yearly rotation on the PGA Tour, SCC is pretty damn cool (I can say that considering I’ve played the course). Unlike many of the older Ross courses, Sedgefield winds its way through somewhat of a subdivision with houses and out of bounds lining pretty much every hole, similar to those crappy Florida courses that seem to do that all the time.

Featured hole of the week is the par 5 15th. I could say it’s because it’s a reachable hole down the stretch where an eagle could jump a guy into contention, or give the leader an even bigger lead, but really it’s because I had a double eagle here back in 2008 when I played in the AJGA Footjoy Invitational. I straight up dunked the ball in the hole for a 2, and was instantly 3 under on the round. Just wanted to get that in. 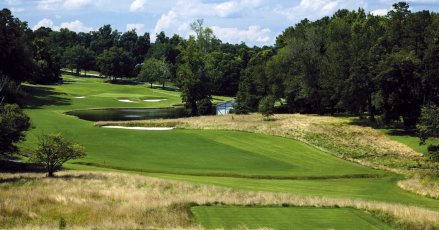 The course is really pretty cool. Take a look at this link which has high res photos of all the holes so you can really get a feel of the course. Oh, and it’s a 7,117 par 70.

Most people’s (can’t say everyone’s just in case) favorite Colombian won by shooting a final round 63 to crush Bill Haas and Freddie Jacobson to win the event. Here’s a picture of his face because there really isn’t much more to say about last year. We don’t live in the past you know?

Tiger. Duh. — The fact that Tiger’s presence means that the tournament needed to print 49 thousand tickets means two things. 1) Tiger has an incredible amount of pull, and 2) People tweeting really need to give reference when tweeting facts. How many tickets did they originally print? If it was something like 200k at the beginning, that’d be an impressive 25% bump. But if it was like 2 million tickets originally, then not so much. Get it together twitter.

With @TigerWoods playing the @WyndhamChamp officials have printed 49K extra tickets for fans to purchase.

Out of Bounds — Mentioned above, but Sedgefield has out of bounds lining every hole, and a few of those holes the OB is impressively close to the fairway. Bad bounces off trees can be an instant 2 strokes for a player, so watch out for 3 woods on the tighter holes.

Justin Thomas — I rarely do this, but I’m calling him as the winner. His play over the past few weeks has been stellar — two top 10s and T18 at the PGA. Thomas also has experience on this course, playing as a 16 year old because he won the aforementioned AJGA Footjoy Invitational. His good play this year, his experience winning here, and all this pent up frustration watching his buddy Spieth win all the time means it is time.

Shoutout to those (like two people) who get this reference. And sorry to the Steeler fan(s) out there.