The Open Championship, the British Open, or simply the Open. What you refer to the tournament as depends on location, though the PGA Tour now officially calls it “The Open Championship”. Though you might disagree on the name, the third major of the year is upon us!

Like the US Open, the British Open doesn’t need a sponsor since it’s a major and all. But unlike the US Open where I kind of babbled about the USGA for a paragraph or two, I’m just going to lament how I don’t get to talk about the sponsor of the PGA Tour event opposite the Open (R.I.P. GMO) The Barbasol Championship! Not even kidding, we live in a time where a shaving cream brand is the title sponsor of a Tour event. So here’s a picture of a can to confuse people who just look at the pictures. 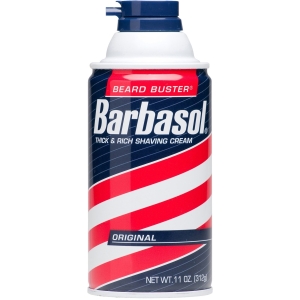 Rule #1 at the Barbasol Championship: No stubble.

The Open Championship is the oldest golf tournament in the world, eeking out the Barbasol Championship being played concurrently in Mississippi. Jokes aside, they don’t call the winner “Champion Golfer of the Year” for nothing. A lot of people joke about how it tries to call itself “the Open” or “The Open Championship” (note the capitalization since it’s important). But when the first tournament was played in 1860, I think they can call it whatever the hell they want.

Currently, there are nine courses in the Open rotation, five in Scotland and four in England. The Old Course hosting every 5 years, with the other courses being awarded the tournament at varying intervals. The tournament also has a precedent of flipping back and forth from Scotland to England.

The oldness factor, the uniqueness of the courses, the time zone difference (for us in America) makes it worth watching every year.

The Old Course at St. Andrews, the home of golf, is hosting the Open Championship for the 29th time, the first being held in 1873, and the most recent in 2010.

Living up to its name, The Old Course is easily one of the oldest in the world, and helped define golf as a sport. The reason golf courses have 18 holes is apparently because that’s how many holes the Old Course had after combining a few holes together to drop the number from the then standard 22 holes.

Now if you never played a links course like this, it’s funky as hell:

Double Greens — There are 7 giant double greens on the course. If you want to do some math, that means that only 4 holes on the course have their own greens. 1, 9, 17 and 18.

The Road Hole — You literally hit your tee shot over some sheds, and can’t see where the ball lands. And these sheds aren’t even old! They were built in the 1980s as replicas of the originals. If any modern course had a shot over a building, it’d be dumb as hell. But the quirkiness is admired here, and in links golf in general.

Now I know this is sacrilegious, but I always wonder if this is one of those cases where nobody really thinks the course is great, but they’re not going to be the ones to stick their heads out and say so cause they’re afraid of being made fun of. Something along the lines of The Royal Nonesuch in Huck Finn. Maybe I should play the course first before saying all this though.

Spieth Slam — If you don’t know what this is, then you’re clearly not paying attention to golf at all. And now I’m wondering why you’d be reading an article like this if you don’t follow golf.

Rory McIlroy’s Instagram — Apparently instagram is the go to site nowadays to give away information about yourself. Rory did that when announcing his ankle injury, Ian Poulter used it to trash Chambers Bay and the US Open. Ignoring how Instagram and not twitter got this distinction, I’m sure he’s going to have some pointless PR of him watching and “wishing [he] could be out there competing too!”

Ian Poulter’s Instagram — I’m sure he’ll have some opinions on the Old Course. Though I don’t think he’s going to say it’s unfair or dumb. Because you can’t. You literally can’t have that opinion about the Old Course.

Early morning golf — Pretty much the opposite of the US Open where instead of having to stay up past 9 to watch the leaders finish, we get to wake up at 4 in the morning (Eastern) to watch the beginning of the ESPN coverage! Even better, the last guys will finish around 3 in the afternoon or so and, assuming you’ll be incredibly motivated after watching Tiger win again, you have time to go out and play on your own!

Mike Terico — ESPN coverage means my fave announcer will be back behind the mic in the early hours of the day. Big fan of him and his work.

Bagpipes and Scottish Accents — I’m sure ESPN has cooked up some lead in videos with bagpipes in the background and a Scottish narrator talking about how St. Andrews is the “Home of Golf”. Hopefully they aren’t too cheesy.

Fish and Chips — Aka, fish and french fries, but you know they can’t call those things French fries in Scotland. Pretty much put this in so I could post a pic of fried fish.