Staying on the East coast, we’re moving a little South to West Virginia to the Greenbrier Classic, with the winner’s share of the purse being a little North of $1.2 million. The winner’s going to have to have good Direction on his shots this week. Sorry for the bad jokes. Preview time at Golf on the Mind.

Here’s a nice change, the title sponsor this week isn’t an insurance company or bank! In a twist, it’s actually the host facility, the Greenbrier.

Considering it usually takes between $8 million and $13 million to be the title sponsor of a Tour event, the Greenbrier must really have a bunch of money to throw around. And the Greenbrier has it. With hotels, golf, shopping, casinos, spas and general outdoor activities, the Greenbrier can easily justify ponying up the cash to be the only sponsor of the tournament. At least that’s what I think because after looking all this up about the Greenbrier, I kind of want to go now.

The history of golf at the Greenbrier is pretty unique. They claim to have the oldest course built in the United States, have hosted a Ryder Cup, and now have a PGA Tour event, all on three different courses. Besides these three, they also have two others for resort guests and members. And if you’re going to play “the oldest course built in America”, you’re only playing 9 holes and you’re using hickory shafted clubs as well.

The Greenbrier is also notably known for having a giant, underground cement bunker (not the golf kind, the nuclear bomb kind) that was to be used by congress in the event of an “event” during the Cold War. I can only imagine the scene in there if congress did have to relocate.

I’d be pretty annoying to sit behind one of those poles and not be able to see.

Congressman 2: “We’re probably safe. I mean, why would you waste a bomb on West Virginia?”

Congressman 1: “But it’s pretty here! And we have the Appalachian Trail. And plus, I’m sure Russia knows that if they dropped a bomb here, the PGA Tour would have to adjust its schedule in 30 years. Talk about wreaking havoc.”

Congressman 2: “Good point. That would really show us.”

Congressman 3: “Where’s the booze and strippers?”

And all of this would have been recorded since the government loves spying on people.

The Greenbrier Classic has been a part of the Tour schedule since 2010, when it took over the dates for the old Buick Open. And in 2012, it moved dates from the end of July (a “bad” date on tour), to early July (considered a “good” date) after re-upping the contract.

Also, a part of the tournament is The Greenbrier Classic Concerts Series, which takes place at the West Virginia State Fair Grounds. This year, we get Keith Urban and The Band Perry on Wednesday, and Husband/wife combo Blake Shelton and Miranda Lambert on Friday. The concert series is apparently more popular than the golf since when I search “Greenbrier Classic” on google, it tries to get me to add “concert series” on the end of the search. Guess we already knew that country music is more important than golf in West Virginia.

Yes! Finally, a tournament played on a course that doesn’t start with TPC! This week’s event is played on The Old White… TPC. Turns out the Tour pulled a fast one on me and hid the TPC acronym at the end of the course’s name. Tricksie PGA Tour.

The Old White course was built back in 1914 and, like the rest of Greenbrier, claims to have a crap ton of “history”. They claim Woodrow Wilson was “one of the first golfers to play The Old White TPC in April of 1914” which just means he played it in the first year it opened. They also claim that “Sam Snead shot his final hole-in-one on The Old White TPC’s Hole 18 in 1995”. I’ll ignore the slight wording issue about “shooting” a hole in one. 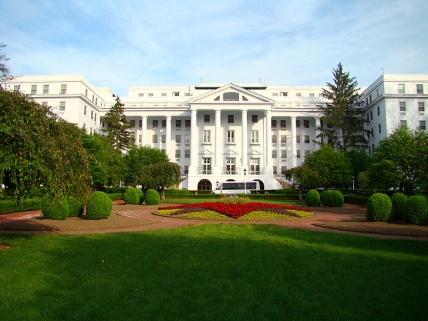 The course joined the TPC network in 2011, and at this point, I can only assume that every course on the PGA Tour will be forced to be a TPC course at some point in the near future. At least the new events. Can’t really see Muirfield Village or Colonial CC being coerced into becoming TPCs.

The course record of 59 by Stewart Appleby. Only -11 since the course is par 70, but it still counts considering the course is listed at over 7,200 yards.

Everyone’s favorite major champion who doesn’t seem to play well at normal Tour events won this Tour event! Angel Cabrera shot a pair of weekend 64s to win by two over George McNeill. And now that I’m looking at his history, this is actually Angel’s first PGA Tour victory that isn’t a major. He literally hadn’t won other than the US Open in 2007 and the Masters in 2009. He was pulling an Andy North (who won twice on tour, both US Opens) until this event.After that reference, I had to look up

After that reference, I had to look up Andy North’s Wikipedia page to confirm he did win the US Open twice. Didn’t have to read past the first sentence to confirm:

Andrew Stewart North (born March 9, 1950) is an American professional golfer who is best known for winning the U.S. Open twice.

As always, thanks Wikipedia.

Bubba staying at his own house — The most recent PGA Tour winner gets to stay in a house he owns this week after buying a home in the Greenbrier complex. If he’s in contention this weekend, I wonder how many times the TV announcers are going to mention that he lives here.

Tiger — Yup, we get to see him again. The Golf Channel is probably salivating about being able to fill up half its coverage with video of Tiger on the range. And I would welcome that since I could watch Tiger hit balls on the range for hours.

Open Championship Qualifiers — This is the second year of this Open Championship qualifying series which allows the top four players, not already qualified, who finish among the top 12 and ties of the three PGA Tour events to gain entry to the Open Championship. Kind of a neat little way to qualify that starts building excitement for the year’s third major.